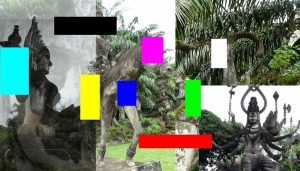 This piece was created with the footage I had shot during my trip to Laos in September 2011. The purpose of this journey to Laos was to research how Ramayana, an epic of ancient India, had been expressed in performing arts and formative arts of Laos. Unfortunately, although I did not encounter so many performing arts which attracted me, I was lucky to discover interesting formative arts in which Ramayana was used as a motif: The golden relief on the doors of the funeral wagon garage, the colorful mosaic on the walls of the treasure repository inside Wat Xiengthong, and so on. TAMEIKI is a 6-7 minute computer music piece accompanied by a moving image where the images of such formative arts are used as its main motifs. The title, TAMEIKI, expresses the sigh of admiration which is the movement deep inside one’s mind. However, once I started the production, I devoted myself to compose sounds and images along the time axis almost independently of the motifs and the title. In that sense, this work is an absolute film and an absolute music.